/ go back / back to all articles

What are the Slow Food Presidia? They are typical food of an area and / or who have a historical culture in the transformation; each garrison is protected by the international non-profit organization (founded in 1986) that protects the table culture and the variety of flavors, the Slow Food.

The garrisons are led by Slow Food projects aimed at supporting and encouraging small high quality handcrafted products so as to ensure a future for farmers, herders, fishermen and craftsmen who keep alive the ancient knowledge about crops and the products for their traditions. The garrisons are supported by the Slow Food Foundation for Biodiversity (sustainable agriculture and the environment, traditions and cultural identities).

In Maremma various products have been identified that will come here to raise awareness.

The origins of this pretzel-shaped savory biscuit are lost somewhere in the Middle Ages. The biscuits were traditionally prepared at home, the recipe jealously guarded by the women of the village of Roccalbegna and passed down from mother to daughter. Until a few decades ago, each kitchen would have a special spoon for mixing the dough, also passed down through the generations.

The recipe uses locally available ingredients (flour, extra-virgin olive oil, aniseeds, white wine, salt), and the biscuit tended to be prepared for special occasions because the main ingredient, olive oil, was very precious.
The biscuits stay fresh and fragrant for a long time, and in the weeks after they were baked they would be eaten for breakfast or at the end of a meal. According to various oral testimonies, it was customary to mark them with keys and other utensils before baking, so that the different batches could be told apart when they were brought to the village’s two wood-burning ovens.
Their preparation involves mixing a dough of flour, extra-virgin olive oil and salt, then adding the aniseeds, which are soaked overnight in white wine. The lightly leavened dough is divided into portions of around 300 grams each, then shaped and braided by hand. After a quick boiling they are ready for baking in the oven.
Roccalbegna savory biscuits have a golden, shiny, irregular surface. Their aroma and flavor is characterized by the olive oil, with lingering aniseed notes.

The art of preserving fish was probably introduced to Orbetello by the Spanish in the 16th century. Bottarga has been made around the lagoon for centuries, but until recently only at home. Most of the mullet with eggs were sent fresh to Sardinia and processed there. Bottarga is made by delicately extracting the egg sacs from the female fish, salting them for a few hours, pressing them and then letting them dry. The amber-colored, irregularly shaped blocks of salted eggs are firm but not dry.

Mullet fishing takes place all year, but culminates between August and September.

A migratory fish, palamita (Atlantic bonito) belongs to the same family as mackerel and tuna. It has some similarities with both of them, especially tuna, and is wrongly believed to be a poor relative. The fish has a strong flavor with a slight hint of acidity and can be cooked in various ways. The best way to enjoy it, however, is preserved in oil. The largest fish are cut into fillets and boiled, then covered with oil and seasoned with bay leaves, pepper and a touch of ginger.

The fish is caught from late spring to early summer (May-June) and then in the fall (October-November). It can be found preserved in oil throughout the year.

In the province of Grosseto, four rivers divide the Maremma into the same number of fertile plains: the Fiora, the Ombrone, the Pecora and the Albegna. This part of Tuscany has been known for grazing since the Middle Ages, and has been a destination for the transhumance, the seasonal migration of livestock, since the 17th century. Flocks would be brought from the Apennine mountains, the Tuscan interior and around Siena to stay here over the winter, a phenomenon that gave rise to the establishment of the Dogana dei Paschi, the “pasture customs,” which the state of Siena used from the late Middle Ages to exercise direct control over the pastures and collect the related taxes.

The seasonality of the grazing and the scant presence of settlements, at least until the swampy areas were reclaimed during the fascist era, were not conducive to the establishment of permanent cheesemaking businesses. The milk from the flocks that spent the winter here instead contributed to the production of excellent sheep’s milk cheese (pecorino) in other places, like Pienza and the Casentino. Only in the 20th century did the Maremma became the main place of production for pecorino in Tuscany.
There are still many dairies in the area, with a diversified production, though the majority of farmers and cheesemakers concentrate on PDO Pecorino Toscano.
Native breeds like the Amiatina are no longer the only ones to be farmed, but have been joined by breeds traditionally imported during the years of the transhumance, like the Sopravvissana, and with the migrations, like the Sarda.
The milk is processed directly on the farm and the resulting pecorino varies in size and age, from 20 days up to 180 days and more for the aged and reserve cheeses. This great variability is due to the fact that there has never been a set of rules for the Maremma farmers to follow, at least not until the establishment of the PDO for Pecorino Toscano, which however covers the whole region. The resulting slightly anarchic spontaneity has influenced the various types of cheese being made, so that alongside those who still use raw milk and no additives are producers who pasteurize their milk and use industrially produced starter cultures. But the quality of the pastures and of the milk from these sheep deserve a new unification of processing styles and the exclusive use of raw milk. This will be the Presidium’s main objective.

Traditionally produced between December and June, but now all year round, apart from during the hottest months and periods with reduced milk availability.

Fishing has a long history in the Orbetello Lagoon, and is essential to the local economy. Sea bass, sea bream, gray mullet, eels, small clams called calcinelli, mazzancolle (a type of shrimp) and small crabs called femminelle are the most commonly caught species, using traditional fishing techniques like the lavoriero, the martavello and the tramaglio. Over time, these systems have been modernized, but they have maintained their sustainability. The fish come to the nets on their own, based on the season and the tides, without the use of bait.

The lavoriero, a barrier once made from wood and now mechanized, is positioned in the channels that allow the exchange of water between the lagoon and the open seas. This system takes advantage of the high tide: As water enters the lagoon from the sea, it attracts shoals of fish towards the barrier and funnels them into a series of “deceptive chambers” that lead them to the “capture chamber,” where the fish, still alive and in the water, are selected by size and either hoisted up with nets or released. In some seasons, not only the high tide but also the reproductive instinct pushes the fish towards the lagoon’s outlet. The sexually mature fish are allowed to pass so that they reach the coastal waters, where they can reproduce. From here, the younger fish, thanks to the low tide, can re-enter the lagoon. The lavoriero is used to catch all of the lagoon’s fish species, as is the tramaglio, a bottom-set net formed of three layers of netting, used primarily in the summer and in November, December and January.
The martavelli and the traps are more selective. Positioned within the lagoon, they only catch eels, femminelle (winter crabs), mazzancolle shrimp and blennies. During the winter, the martavelli, funnel-shaped nets with a final chamber, are fixed inside “deceptive structures” made from nets, canes and poles. In the summer they are fixed inside less-complicated structures known as crocioni and can be moved every day.
Fish processing also has a historic tradition here. Apart from the classic smoking and marinating, two unusual techniques are a legacy of Spanish rule in the 16th and 17th centuries: sfumatura (the fish is seasoned with a sauce based on sweet peppers) and scavecciatura (a kind of escabeche, using a hot marinade of vinegar, rosemary, garlic and peppers).

The catch changes throughout the year depending on the season: mazzancolle shrimp in the winter and spring, femminelle crabs and calcinelli clams only in the winter and gray mullet, eels and sea bass year-round.

This extraordinarily robust native breed, with large lyre-shape horns and a grayish coat, saw its popularity peak between the two world wars. As the marshes were drained and mechanization became more common in agriculture, however, it came close to extinction. Now there are around 20,000 animals in three regions—Marche, Lazio and Tuscany—with the largest farms in Maremma. The Maremmana is frugal, adapts well to difficult environments and cannot be kept indoors, but must roam freely. This explains the survival of the figure of the “buttero”, the horse-riding cowboy who herds the cattle. The fact that the cattle range in the wild contributes to their well-being and to makes their meat especially flavorful and wholesome. 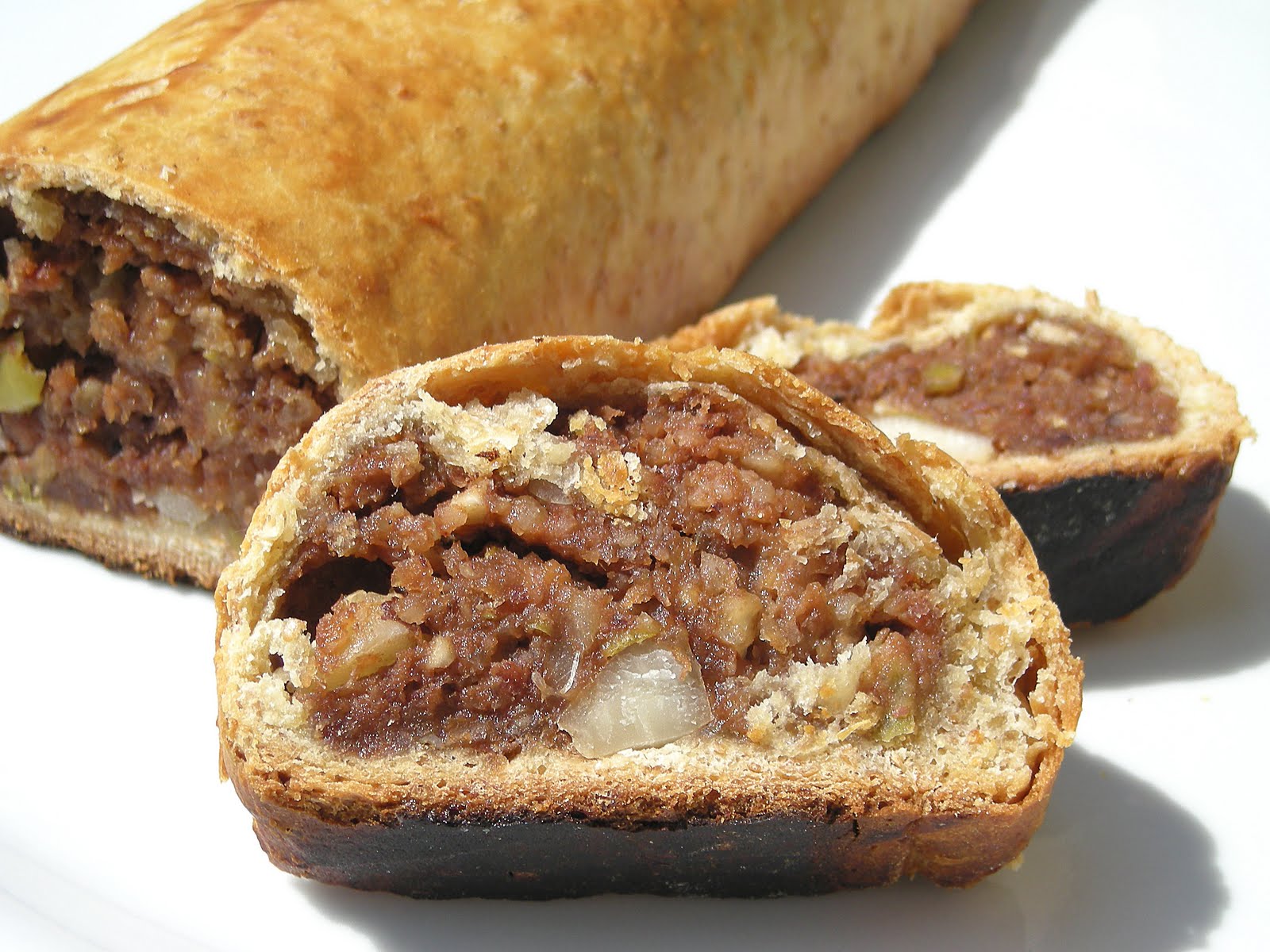 These cookies are the result of a blending of Jewish tradition and Maremma gastronomy. Jews began to arrive in this part of Tuscany in the 16th century, fleeing the ghettos of Rome, Florence and Siena. The origins of sfratto date back to the 17th century, when Cosimo II de’ Medici ordered all the Jews in Pitigliano to move to a single neighborhood. His envoys went around beating on the doors of Jewish houses with a stick, forcing their eviction (“sfratto” in Italian). The cookie of the same name is shaped like a stick, with a very thin layer of unleavened dough wrapped around a filling of chopped walnuts, honey, orange peel and nutmeg.

Sfratto cookies are made all year, but especially during the Christmas period.

The information and citations of this article is an excerpt of the official website of Slow Food: http://www.fondazioneslowfood.com/en/slow-food-presidia